Class By The River: Floating Schools

Imagine a world where kids didn’t have to sit in a generic classroom all day…! Well, in Bangladesh they don’t... at least not sometimes!

Twice a year during the height of monsoon season the village of Shidhulai goes underwater. Leaving homes, roads and even schools unusable, the towns and villages have to act fast to stay dry. However, the children don’t get out of it that easy… instead they pack their lunch, gather their books and wait at the “bus” stop for their ride to school. Here’s the twist; they don’t go to school and they don’t get on a bus. They board a boat that has been fitted out with all the conventional school tools necessary to study... even an on-board library! 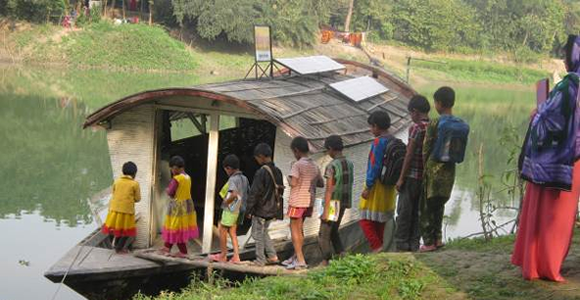 Powered with solar panels, climate change doesn’t get in the way of education as it shouldn’t! It is an astounding that they make sure that nothing stops their education. The ‘boat schools’ were first conceived in 2002 and have since stopped door to door to ensure every child gets their right to learn. Another advantage is that there are no more arguments about who is doing the school run… Bonus! Seriously though, since the scheme commenced, no less than 100 boat schools have benefitted 70,000 kids… simply amazing. 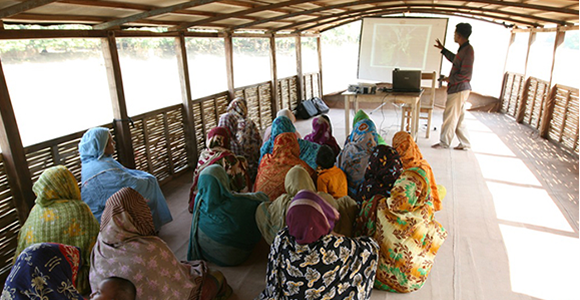 You might not be able to get signal or Wi-Fi on top of the highest mountain in the world but somehow, the central library has access to 100 computers that are internet linked, luckily!  I want to know what network they’re with… It is bad enough trying to get a good signal in Taunton at times! The library is equipped with over 50,000 books (better than some UK libraries) and I guessing that “the dog ate my homework” excuse is more problematic during the rainy season! Maybe you could try water damage…?

Surprisingly this weird, but wonderful idea has been hugely successful and boats are now used for healthcare and homes. There is no doubt that the kids enjoy it… then again, when you are learning maths and literacy on a boat that’s got better internet connection than some UK providers, why wouldn’t you? This can only be described as one big school trip! With global warming causing so much havoc, who knows, one day we might be doing the same on the Thames!