MFS II: From Makoko to Venice

In 2013 a prototype for a “floating school” was docked in a lagoon located in Nigeria’s largest city, Lagos. Situated within the district of Makoko, the prototype was designed and built by Kunle Adeyemi alongside design and architecture company NLE, who focus on the development of cities.

Using local materials and skills, the floating timber structure shows an alternative way of building that accommodates climate change and the rapid urbanisation of African cities. Makoko is a “slum neighbourhood” in Lagos that is prone to unpredictable flooding. This gives the floating structure a chance for education to continue as it adapts to the conditions that the historic water community are surrounded by. Adeyemi has designed a structure that emphasises the importance of education and one that ensures that this important process will continue on.

Adeyemi and NLE brought the idea to life, starting in their Amsterdam based office. Amsterdam of course, also being surrounded by water, is a city that has had much experience and granted expertise in the control of flooding and water conditions. Surrounded with talented experts such as Dutch naval architect Erik Wassen and with the help from a number of non-government funded organisations including the UN, the Makoko Floating School was designed to be used as “an extension to an existing school in the shantytown”. The 3 floor “A-Frame timber structure” offers classroom space for up to 100 children across 2 of the floors. The bottom “floor” is used for recreational “playground” space and the composition is held afloat by 256 blue plastic barrels. The floating school is powered by solar energy, making the use of a natural energy source to adapt to more frequent flooding conditions, caused by global warming.

“The school is part of steps to upgrade slums around the World.”

A copy of the prototype is currently docked in Venice as a “Venice Biennale 2016” exhibition. MFS II is part of the “Waterfront Atlas” exhibition which looks at the development of coastal communities. There are a few similarities between Makoko and Venice, I am guessing that this was one of the main reasons why Adeyemi was so keen to show his masterpiece off in the famous Italian city. The population numbers are quite similar between the 2 locations: an estimated 80,000 people in Makoko and 60,000 in Venice. A striking similarity is that both places have been impacted by flooding more than they have encountered wars and this has even more so with the effects of climate change.

The picturesque setting that is provided by both lagoons is also a factor for exhibiting MFS II in Venice. Both locations are popular destinations for photographers and artists due to the scenery and lifestyle. The floating schools seem to make use of art and architecture as a way of strengthening the importance of education for future generations! 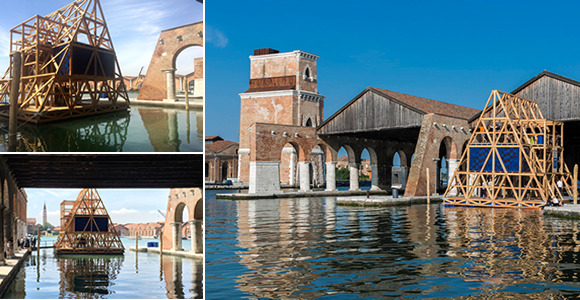 Progress is also shown with regards to social climates. Venice was once a city that was powerful and wealthy, created by fisherman who adapted to the environment and now a heritage site. Makoko is an area that seems to be going through the same process, a community that is settling and adapting to the location’s domain. It may be a very long time until Makoko is as successful as Venice was, but education will play a large roll in achieving this. The floating structure highlights this idea by showing what evolution of social conditions can achieve whilst adapting to the modern World.

Receiving a lot of deserved praise and recognition by the jury, Adeyemi has been awarded the Silver Lion for the project in Venice, inspiring the World.

“A powerful demonstration, be it in Lago or in Venice, that architecture, at once iconic and pragmatic, can amplify the importance of education.”